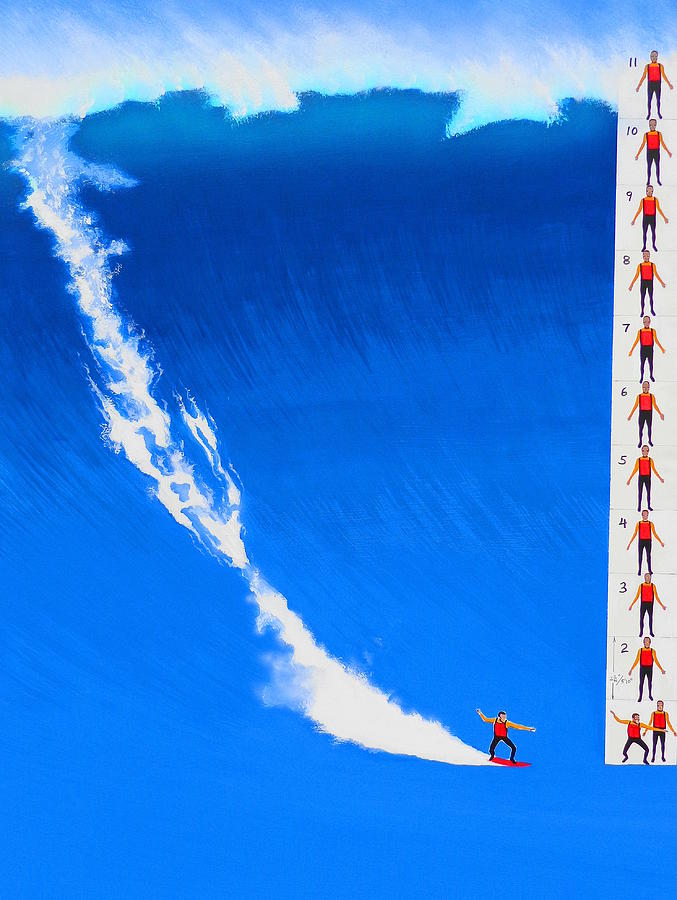 This is my 30 x 40 inch analysis of the biggest wave at Nazare, Portugal, on 11-1-11. The Billabong XXL judged this as officially the biggest wave ever surfed, at 78 feet. Bradshaw's wave at Log Cabins is generally accepted as 80 feet or higher, but this wave has better evidence in a video than the terribly graining video by Bill Ballard of Ken at Log Cabins. My calculations indicate about 11 times overhead. From this very high camera angle the trough is approx. where Garrett MacNamara is standing, or even higher, and Garrett is 5'10" tall. 11 X 5.8333 = 64 feet. Far short of 78 feet. What happened? Exceptionally high camera angle (100 yards high looking down on a wave that is exceptionally close to shore, about 200 yards) and the surfer squatted MORE as being photographed. This was not intentional, he was simply absorbing the shock from going over a bump, making himself look much smaller. In the video you can only see the yellow wet suit arms because his dark wetsuit blends into the dark wave (unlike in this high-contrast illustration here). Just before Garrett becomes obscured by a cloud of spray from the previous wave, his wave reaches maximum height. He is bouncing up and down making himself look smaller and larger, over and over. The definitive frame caught him looking smaller. Watch the video and judge for yourself: