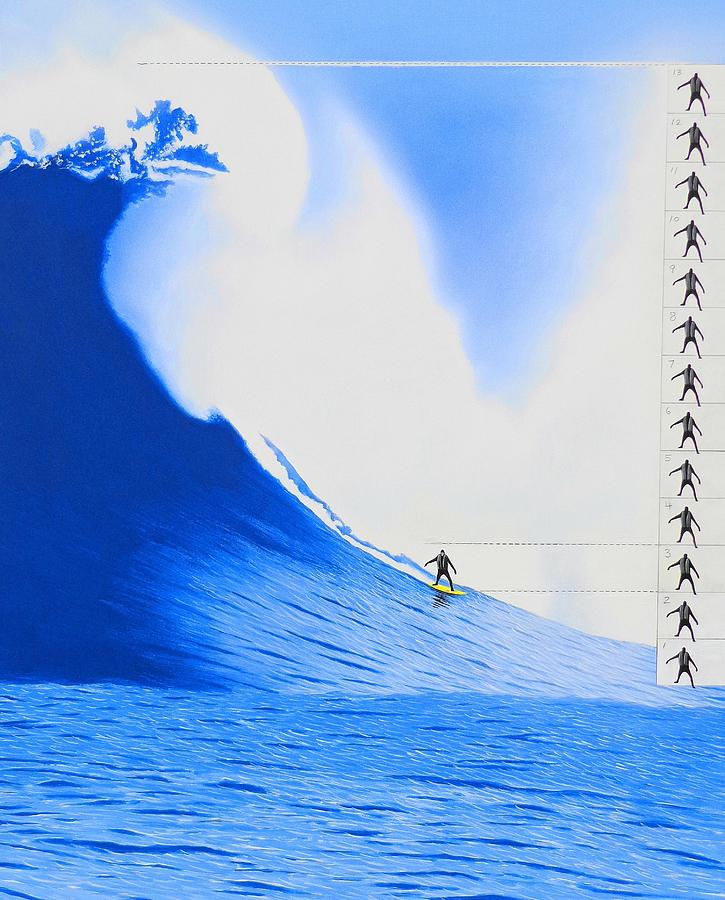 This is my 30x40 inch analysis of the height of this famous wave that a surfer was towed into at Cortes Bank on 1-05-08. The tricky part was figuring out how tall the surfer would be standing up straight, because of his unusual crouching stance. Here is how I estimate wave height. Measure the wave, divide the surfer's height (standing up straight) into the wave's height to get times overhead, and multiply that by the surfer's height. If Mike Parsons is 6' tall (as I recall), the wave would be 13 x 6' = 78 feet tall, which is very close to the Billabong XXL judges estimate of 77 feet. He had been riding the wave for 15 seconds before the photo was taken. It may have been over 80 feet near the start of the ride. This still is the only view in existence, that I know of, from a water-angle a true 13-times-overhead wave. See the actual photo that appeared in the New York Times article. If link below does not work, search Google "Surfers Defy Giant Waves Awakened by Storm". That is the actual photo.

Because of the extremely dangerous conditions, only a few photos were taken from the boat by Robert Brown. According to the mission's videographer Matt Wybenga, Mike Parsons has a video of the day but few people have seen it because it is so hard to watch. It makes one seasick just watching the video. I told Matt I can reconstruct a single frame from the video if he could contact Mike Parsons for permission. Anyone know how to contact Mike Parsons directly?

Here is what Matt replied to me when I inquired about his video:

"I was hired by Mike Parsons to shoot that day, he has the footage and owns it. Only a select few people have seen the footage, Sean Collins (RIP) and a few over at Surfline. Mike is keeping the footage private as it was such a historic day. The photos from that day don't do it justice. It was by far the biggest day anyone has ever surfed. The shooting conditions were far from ideal as it was breaking way up the reef where solid 80 footers (I'm being conservative) would come in between us and the surfers. The photo of Snips winning wave was bigger than it got credit for... as that photo was shot after a 80 foot set broke and wasn't obstructing the view anymore. He was riding that wave for a good 15 seconds before the photo was taken at which point he was on the shoulder. There's a great chapter in the book "Ghost Wave" about our trip out there, which was one of the craziest boat trips I've ever been on. I believe it's chapter 11."

Why would Mike Parsons want to keep such an historic event private? I cannot believe that. Please share your opinion with me through "Click here to contact the Artist" button, located on the right side under where it says "Buy the Original Painting".