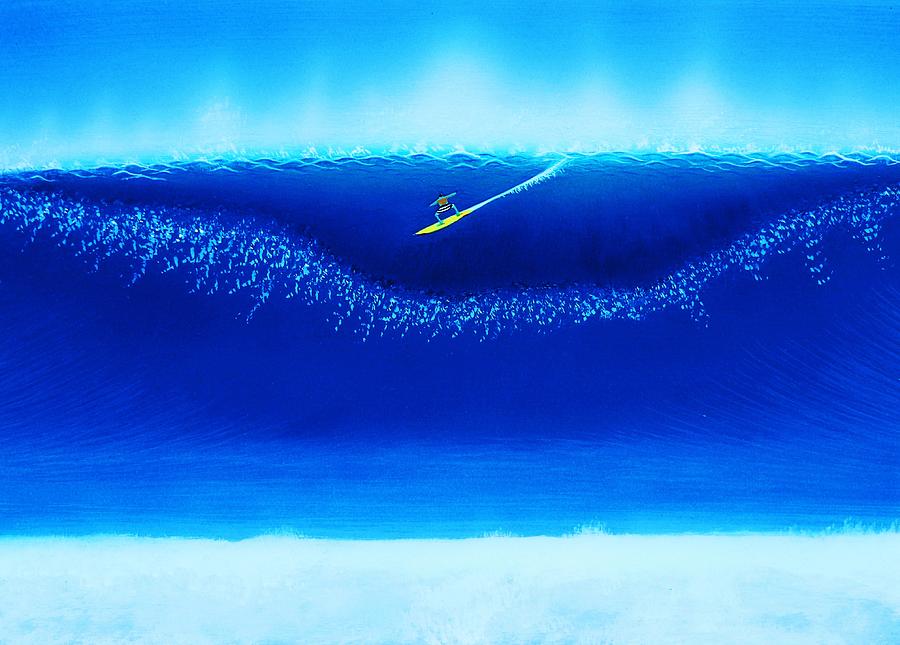 Greg Noll paddled into this wave at Makaha, Oahu, on 12-4-69, the day Waimea closed out. This is my artist-conception scale of what that wave might have looked, exactly based on Larry Goddard's famous photo of another wave that had Greg's board frozen in the lip that appeared in the LA Times. I was told that Greg actually lost his board just before that wave, but it fortunately popped back within his reach so he could retrieve it and continue paddling out. This is a water-angle view.

He made the drop and could see the wave was closing out so Greg laid back, thinking he could dig a hole in the trough and escape through the back. That was just the beginning of his survival story. It was a life or death struggle to reach shore before the raging current carried him into the boulders.

"I could see Clausmyer's house at the end of the line. I could see the rocky beach coming up." As he staggered onto the beach his friend and witness of THE wave, Buffalo Keaulana was there to offer him a beer and tell him that good thing he made the swim because no way was he going to risk his life in the shorebreak to try to rescue him from the boulders. According to Greg, Buffalo said "Good ting you make 'em Brudda cause no way I was commin' in afta you. I was jus goin' wave goodbye and say 'Alooo-ha". Read about it in "The Big Drop" by John Long. In 1969 this was generally accepted the "biggest wave ever surfed".

Congratulations on your sale of this wonderful artwork! F/L